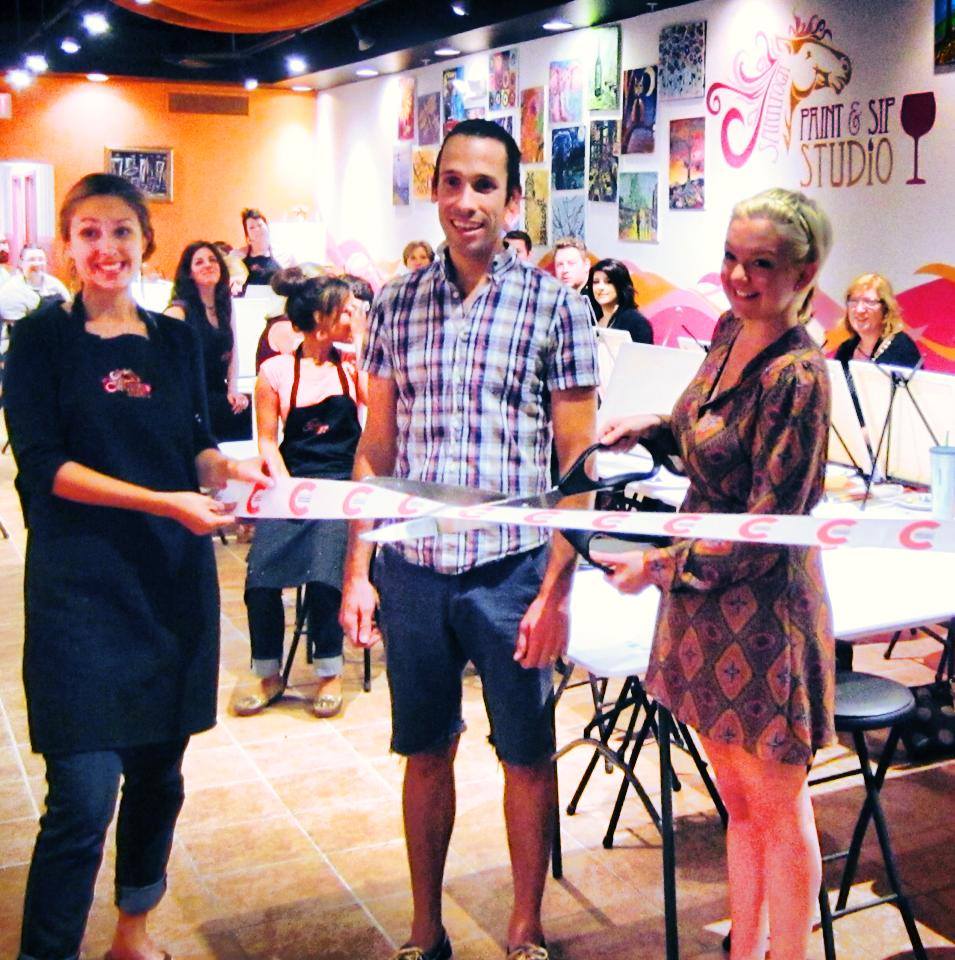 Mark and Catherine are the entrepreneurs behind Saratoga and Burlington Paint & Sip Studio. They are originally from Southeast Louisana and now call Upstate New York their home! Shortly after moving to the area for Mark’s career, they quickly fell in love with all that the region has to offer. In April of 2012, they opened the coolest little paint studio and bar in downtown Saratoga Springs. The first of its kind in the Capital Region, the studio quickly became a staple in the Saratoga Springs community. A year and a half later, they opened a second studio in Latham, NY in the very popular Newton Plaza shopping center. In January of 2015, the Hover’s ventured across state lines and opened the first paint and drink studio to Vermont with Burlington Paint and Sip Studio on Church Street in Burlington’s Downtown Marketplace. Mark and Catherine have a 3 year old daughter and will be welcoming their 2nd child in January! Catherine is actively seeking ways to encourage and inspire non-experienced artists like herself to create and explore all of their artistic talents!

Michele is an artist recently relocated from NYC to a haunted convent apartment in Troy. She studied Fashion Design at Marist. Her interests include painting, cats, Wes Anderson, sketching, cats, fashion, cats, wine, cats, sarcasm, and all things vintage and fabulous. When not brokering insurance or teaching, you can find her walking her cat Peeve in her neighborhood sipping wine from her flask scarf.

Monica is an artist who lives and works in Albany, NY. She is currently pursuing her Master’s in Fine Art at The University at Albany SUNY. Monica received a BFA in Painting & Drawing from The College of St. Rose and a certificate in Art Education. She makes large abstract, but figurative acrylic paintings. When Monica isn’t busy painting, drawing or teaching, she loves to spend time with her husband and their two kitties (Dexter and Ulysses). She thoroughly enjoys yoga, drinking coffee (and wine), and doing lots of outdoorsy stuff such as biking, running, and kayaking.

Ashley is one of Paint and Sip’s OG artists. She’s been at the Saratoga studio longer than the Kardashians have been famous. Ashley uses her art degree in various ways, including but not limited to: painting, portraiture, murals, illustration, graphic design and even has her own Etsy page where she sells stuff (not just any stuff either, it’s her stuff.) She enjoys going to the beach, ice cream, travelling and hiking. She loves cuddling with her 2 cats Remy and Charlie and her puppy Abby.. and sometimes her husband, Cory, if there’s time.

Michelle B. is a recent addition to the Paint & Sip team at the Latham studio. She has a bachelors degree in business from SUNY and works in IT.  She has always had a passion for sketching, painting and anything crafty.  She enjoys teaching inexperienced artists painting techniques and helping them discover their artistic talent.  In addition to the studio, she also works part-time at a veterinary clinic.  In her free time she likes spending time with her husband, camping, traveling and getting her hands dirty in the garden. She works hard so that her 2 dogs, 2 birds and cat can have nice things.

My name is Bethany I am currently Studying Art at The University of Albany and working towards my Bachelor’s Degree. I started working at Paint and Sip back in May of 2016. I currently work as a Photographer and enjoy teaching classes at Saratoga Paint and Sip.

-I’m from Birmingham, England and moved to South Burlington, VT in August, 2017 with my Fiancé Robby.
-Received a Bachelors with Honors Degree in Graphic Design from the Cambridge School of Art and is working as a full time Graphic Designer. I also have an associates degree in Illustration.
-Knows every word to the Harry Potter movies so gets super excited to teach the Harry Potter theme nights at the studio.

Claire was born and raised in SC and moved to Vermont 11 years ago.  Joining the Paint and Sip family in August 2015 brought her back to her artistic roots.  Claire received her BA in Studio Art with an emphasis in painting back in 1997 from Columbia College of SC, and since has been working in higher education and non-profit development in her full-time life.  She loves the time she spends at the studio helping people develop their painting skills.  When not at work you will often find Claire having a cocktail with friends, hanging with her wife and dogs, and giving much unsolicited advice to anyone who will listen.

Sarah has been an artist at the Latham studio since July 2015.  She is well-versed in the art of painting and sipping.  Sarah went to school for Psychology, with a minor in Art Therapy.  She enjoys themed parties, sour beer, casual exercise, dogs, and french fries.  She can’t get enough of the TV show, “Bob’s Burgers”.  Sarah is afraid of snakes, the effects of global warming, and not using ~enough~ colors in her paintings.  Sarah’s a beer gal, but you’ll see her enjoying the occasional mimosa at Saratoga Paint and Sip.

Hey Y’all! Kathryn’s as sweet as southern tea (probably because she grew up in Myrtle Beach, SC).  She’s the real deal, like the sun tea kind that sits out on your back porch, speaking of porch she loves the outdoors. Kathryn comes from corporate retail and has learned much about business. Saratoga P&S was a celebratory tradition in her personal life until it became a staple on her path to purpose. She enjoys sarcasm, her “bold” Blue Heeler named Spice, playing Cat-Peach on Nintendo Switch, and authentic people. Oh yeah and she’s writing her first book while drinking Stella Artois Cidre. Favorite quote: “Nothing ventured, nothing gained.”

No Experience Necessary. All you need to Bring is Yourself!